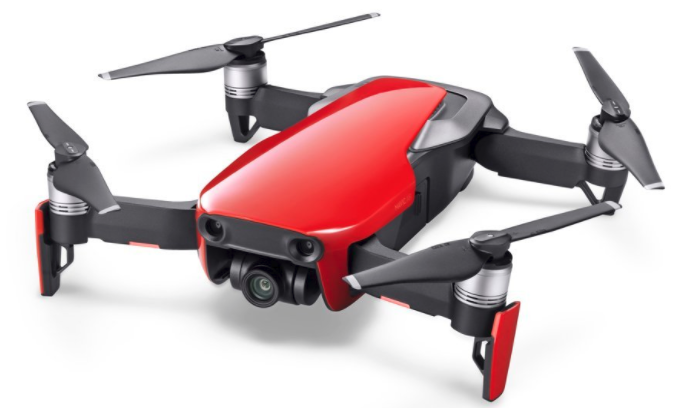 Is something really new, they have made a mixture of technologies taking some characteristics of the Spark and many things of the Mavic Pro and the Phantom 4.

The Mavic Air is smaller than the Mavic pro, but it is a little bigger than the Spark, it has a weight of (450 Grams approximately) 0.95 Pounds but is coming with a new Gimbal of 3 axis that even seems to be more robust than the one of the Mavic, the camera that has is 1 / 2.3 inches with a sensitivity a bit limited to low light, in 24 mm. The focus of this model is wider than the 28 mm. The Mavic Pro. Its wide-angle, fixed-focus camera like the Mavic Pro has been a great DJI decision because in reality all cameras with small sensors and wide-angle lenses do not require automatic focusing, everything that is more than three feet of the camera is automatically set to Infinity, the 1080 video mode can record video at 120 frames per second to make slow motion.

The Mavic Air has advanced functions to return to the starting point whether it is requested or when it detects that its battery charge is low or has any other problem. It also has more forward and backward sensors that protect Drone of buildings, trees and other obstacles making it much safer.

The only negative thing about this new Drone is its lower quality Radio transmission, which is based on Wi Fi technology like that of the Phantom, while its Big Brother the Mavic Pro is based on a much more advanced technology that is the OcuSync Link. . The Mavic Air radio connection is similar to the Spark and the Phantoms, while the Mavic Pro has a range of approximately 7 kilometers the Mavic Air can reach only 4, which at the end is not so bad because it fits well enough to FAA regulations that require keeping the line of sight, the biggest problem of reception can happen in urban areas that are very congested with an infinity of Wi Fi connections.

It has great advantages, it is much more compact and lighter than the Mavic Pro, has its Gimbal 3-axis

Actually and taking into account all the pros and cons is a Drone with an affordable price, although it does not have the reach of the Mavic Pro, but with all it has is perfectly usable and with its three axis camera can create some really impressive videos, to my way of seeing it I think it has many more good than bad things, it is really convincing and I honestly believe that it is a good purchase.